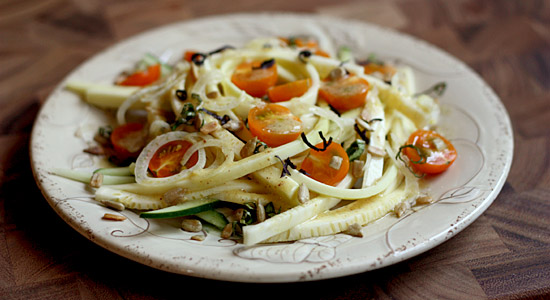 There’s much to love about summer produce. When the days grow long and the thermometer inches up past 95°F, I can tell you that one of the last things I want on my tummy is something heavy, creamy and starchy.

That doesn’t mean, of course, that I don’t love those things. (Gasp! Bite thy tongue!) But when I’m sweltering from my blood vessels to my scalp to my toes, I can only stomach things chilly, crisp and bright.

This zucchini-starring vegetable dish is just the thing for a Saturday lunch following a scorching, dripping, manic weeding session in the carrot patch. No oven, no stove. Minimal mixing. Just a little prep work. Chilly, crisp and bright. 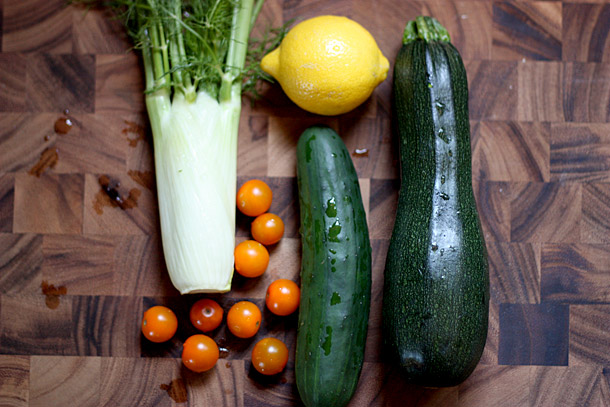 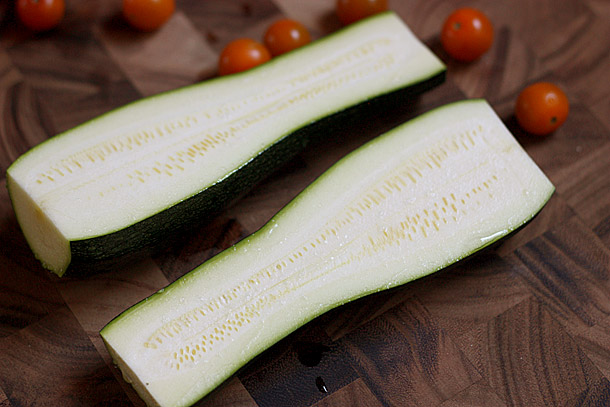 The “linguine” in this recipe comes from the zucchini. Sliced into narrow strips, zucchini bears a surprising resemblance to pasta, both in texture and taste. Somewhat bland before seasoning, zucchini takes on flavor from the other ingredients, especially the vinaigrette, just like pasta.

(Yes, you can eat zucchini raw. You can eat most any squash raw, although I’d advise breaking the winter varieties down into smaller bits, such as shaving or grating butternut squash for a salad.) 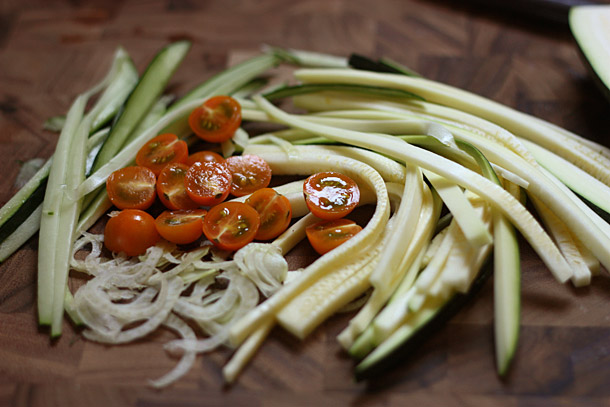 It occurs to me only now that I put cucumbers in just about every summer dish. Until my own cucumbers mature, I’ve been buying them up at farmers’ markets since June. 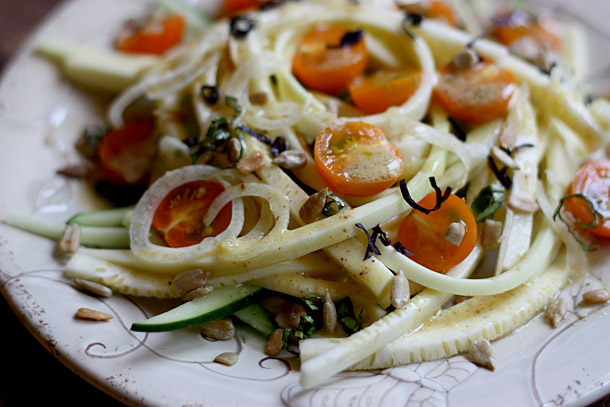 Serve slightly chilled and topped with fresh herbs. On a side note, sunflower seeds and pepitas have become my favorite salad garnishes this summer. Either (or both!) adds just the right touch of nuttiness, contrast and crunch.

Slice the zucchini and cucumber into long, narrow julienne strips. Here’s what I do:

Cut the vegetables in half lengthwise, then use a mandolin to create long, medium-thin slices (cut side down on the mandolin). Use a sharp paring knife to cut thin strips from the flat the slices.

Now you’re ready to assemble! Divide the ingredients in half, to prepare two plates.

On a salad plate, arrange the cucumber strips in a kind of pick-up-sticks pile – fan them out or create a swirl. Don’t expect the cucumbers to bend; they won’t.

Gather up the zucchini strips, holding the bunch on one end, and drape them over the cucumbers in a circular path, creating a pile. It’s sometimes easier to do this in two batches so you can make sure the circle is even on all sides. (There are no wet ingredients at this point: you can always pick up the zucchini strips and try again.)

Distribute the tomatoes, fennel, basil, scallions and sunflower seeds over the zucchini. Season the dish with salt, then drizzle lemon dijon vinaigrette on top. Repeat for the second plate.

Add all ingredients to a small bowl and whisk until mostly incorporated. You don’t need to achieve a perfect emulsion. Taste and add more salt, if desired.

from → Kitchen, Seed to table