Oh, Mother Nature. You are such the drama queen. First, all you do is rain, rain, rain. For weeks. Then months. MarchAprilMay. And then —poof!— it all simply dries up. It’s June 10th, and the temperature has topped out at over 90°F for five of the last seven days (normal highs: 80). My poor carrot and French orange melon seedlings are valiantly pushing their way up through scorched, cracked earth. My spring vegetables—usually lush and productive to the first day of summer—are all bolting* in revolt.

Did I mention it’s only June 10th?

As the Midwest prepares to plunge into yet another above-average-temperature summer, I wanted to share some quick tips about collecting rainwater. As a gardener with extensive vegetables gardens but no drip irrigation system, my escalating water bill in recent years has caused me to seek alternatives. Capturing rainwater was the obvious choice.

Now, being a frugalist, I was not about to fork out $400 for rain barrels (hello, too cheap to install drip irrigation, much less buy barrels.) No, this had to be an affordable and easy-to-set-up-and tear-down option.

The solution proved to be right up my frugalist, home-maintenance-challenged alley. 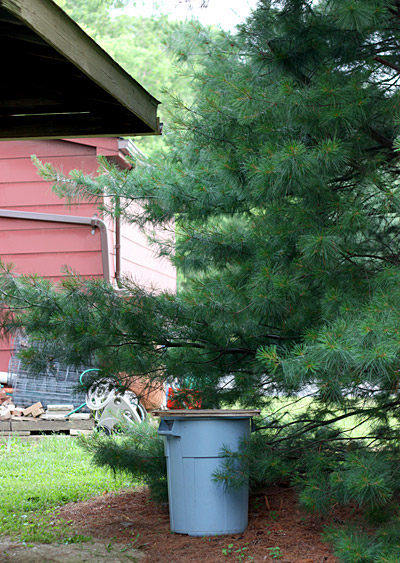 An outbuilding at the back of my property has no gutter system on its roof, and sags in such a way that rainwater flows off of one spot in a steady stream. My brother had the ingenious idea to tuck a garbage can in the nearby pine trees, catching all of the water from that stream. (In the noble effort of recapturing rainwater, I have a valid excuse for not repairing the roof. Ha HA!)

This outbuilding is quite large with an expansive roof, so a good downpour fills this 32 gallon container very efficiently. Once filled, the container is wrangled to the side to make way for a 45 gallon container (which is not set up yet because we haven’t had any rain.)

(Note that the garbage cans I used were never used for garbage. One was never used at all, and the other stored excess soil during the previous growing season.) 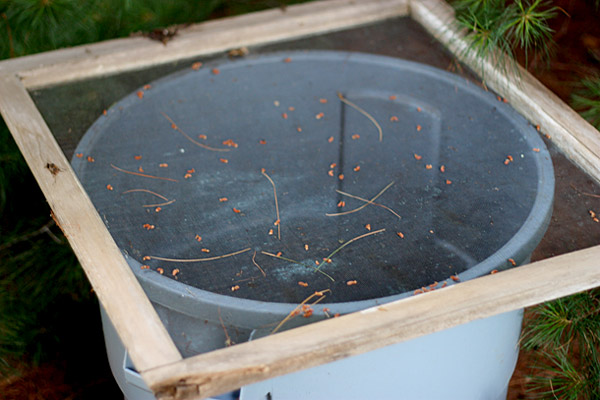 An old window screen provides a makeshift filtering system, keeping both debris and mosquitoes out of the water.

My two-gallon water can dips neatly into both containers, negating the need for a spigot.

I’ve also been known to drag out storage tubs — you know, the ones that seem like a really good idea during New Year’s Resolution madness, but then sit around empty and judgmental the rest of the year — onto the back deck during a prolonged period of rain. Every little bit helps. 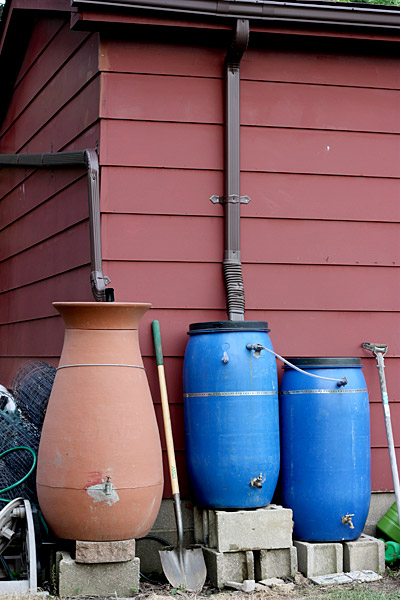 If you’re feeling fancy about the whole rain collection thing, you can do a slightly more complicated set up, like that (above) used by the community garden that borders my property. Gutters were installed along the two eaves of a small shed, with extended downspouts feeding the rain barrels. If you’re handy — or know someone who is — you can easily (I’m told) alter an existing downspout to drain into a container.

A simple overflow connector hose channels water to the third barrel when the second barrel is full.

One frustrating issue with these barrels is that the spigot is prone to leaking (note the repeated patch jobs on the terra cotta barrel). Damage is somewhat mitigated by strapping the barrels to the building so they remain unmovable (and untippable when empty), but the vulnerable position of the spigot makes damage inevitable.

These barrels, however, service 22 garden plots producing hundreds of tomatoes, peppers, potatoes, onions. And thousands of zucchinis. (Natch.) For the community garden, it’s been a worthwhile purchase.

Well, now, look at that. As I’m about to hit the “Publish” button on this post, rain has begun beating against my window, and the first crack of thunder in weeks sends my kitties dashing for cover under the bed.

* Bolting is the process that occurs at the end of a plant’s growth cycle, when it sends out a shoot and attempts to flower for the explicit purpose of producing seeds (not fruit), thereby propagating its kind. This is a different type of flowering than, say, a tomato or a bell pepper, where the flower produces fruit, which contains seeds for propagation. Lettuce (most greens, in fact), parsley, cauliflower, radishes all bolt, and once they do, the plant is useless (you may have heard this process referred to more commonly as “going to seed”). Bolting is normally tied directly to day-length. Spring crops, hard-wired for short days, will naturally bolt as days lengthen toward summer. Extreme fluctuations in temperature, however, can cause plants to bolt prematurely.