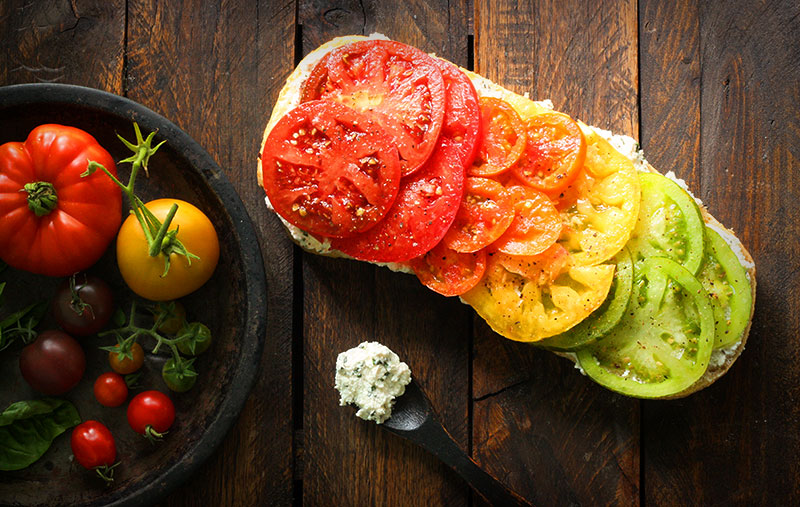 One of the joys and rewards of growing heirloom tomatoes are the beautiful colors and shapes that emerge from these amazing plants. August and September welcome a garden full of jewels, and for tomato lovers like myself, it’s Christmas, every day, stepping among the plants, lifting the branches, and looking for ripe wonderfulness.

The heart skips a beat when a perfect specimen is found, especially one left unmarked by the King of Chipmunks, who has been helping himself to my tomatoes so gluttonously this year, he actually has a little Buddha belly. (I must find a way to snap a picture — he’s still super quick, despite his size). 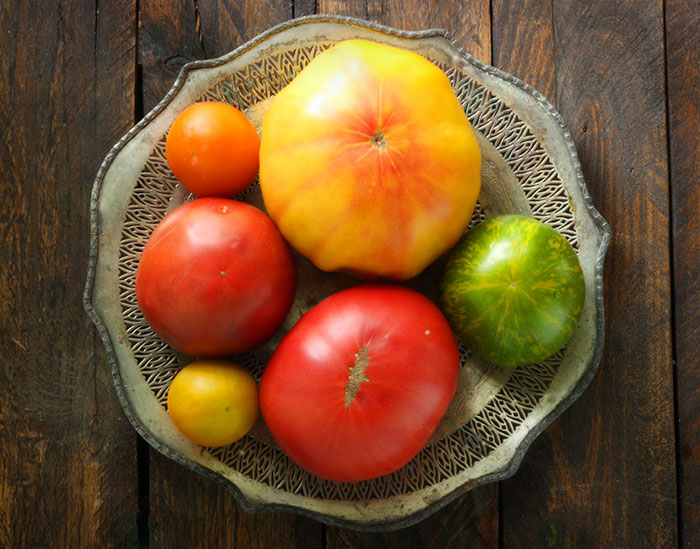 I intentionally planted a rainbow of tomatoes this year, because I wanted to do the very thing you’re looking at today. (If you’ve been to the newsstand lately, you’ve probably seen the cover of Martha Stewart Living: she beat me to the punch in terms of timing, but believe me, I’ve been dreaming of this post since January, when I began making my final tomato seed selections — I just needed everything to ripen simultaneously. Plus, my dreams included a layer of herbed ricotta, which adds a wonderful texture to each bite (as we know from caprese salads, creamy dairy and acidy tomatoes are BFFs). 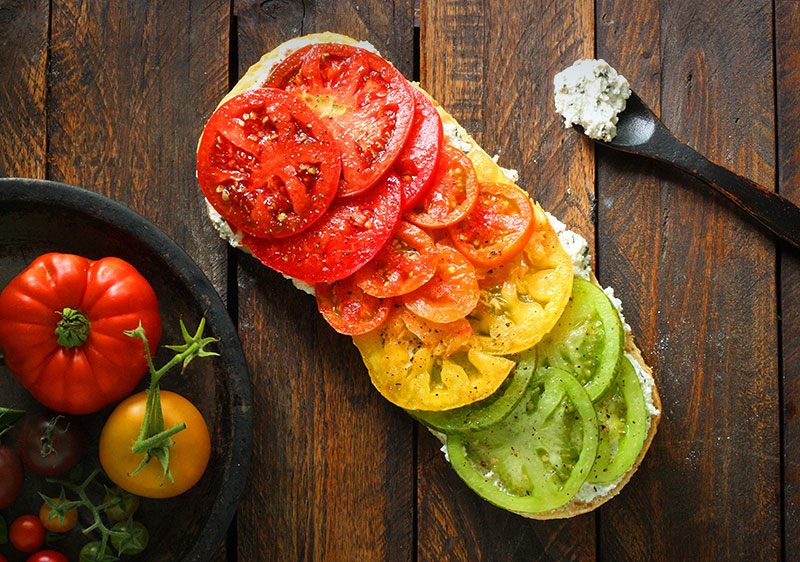 This appetizer — or, on a normal, non-party day, a main dish alongside a garden salad — is so ridiculously simple, its “Wow” factor is definitely worth seeking out the tomato variety, if you don’t already grow them yourself.

Heirloom tomatoes remain all the rage at farmers’ markets — you shouldn’t have any trouble finding at least three colors. Even just yellow, orange, and red would be beautiful.

Or, seek out a home tomato gardener like myself, if you have one in your personal circle, and hint around for some samples. It won’t take much of a hint — it’s been my experience that home gardeners find as much joy in sharing their garden goodies as they do growing them. This year, I’ve nurtured a few bartering relationships, exchanging vegetables with other gardeners who grow what I don’t, and vice versa. Very rewarding, mutually beneficial, and a wonderful excuse to gather like minds and chat about our shared hobby. 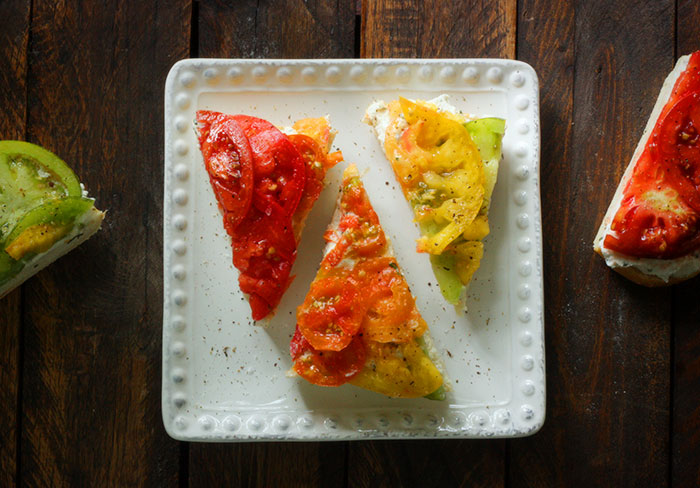 Preparation tip: use a very sharp serrated knife for slicing both bread and tomatoes. Intuition might say that the serrated tips would shred a tomato, but a super-sharp knife actually makes very clean cuts. Alternatively, use the sharpest knife you own, preferably a thin-bladed paring knife.

Cut off the lower 4th of the tomato, and then begin slicing from the thicker round. Be careful not to squeeze the tomato as you’re cutting, or else you could end up with a uneven thickness (thin where you began the cut; thick where you ended).

Do just a light toasting of the bread, to keep it easy to slice once assembled.

Don’t worry about the tomatoes’ gel and seeds — with the ricotta layer between the bread and the tomatos, the bread won’t become soggy, even if they must sit for a spell before consumption.

To serve at a party, make an extra loaf, if you can, and leave one of its halves unsliced. Or if your party is smaller, just slice up one baguette half until you need the other.

It’s totally okay to want to show off.

Stunning, yet super-simple appetizer. Your guests will devour them. I call for 5 different colors here, but just yellow, orange and red will still be beautiful. Don’t be concerned about the green tomatoes – there are lovely heirloom varieties that are ripe when green (such as the Green Zebra shown in the photos accompanying this recipe) — should be easily found at a well-vendored farmers’ market. Their flavors are usually bright, sweet, and lightly tomatoey. The yellow tomato, by the way, is a Yellow Pineapple, which has red streaks throughout — it’s a beaut. (In case you’re curious, the other tomatoes used here are Jaune Flamme (orange), Costoluto Genovese (red), and Black Krim (purple).)

from → Kitchen, Seed to table