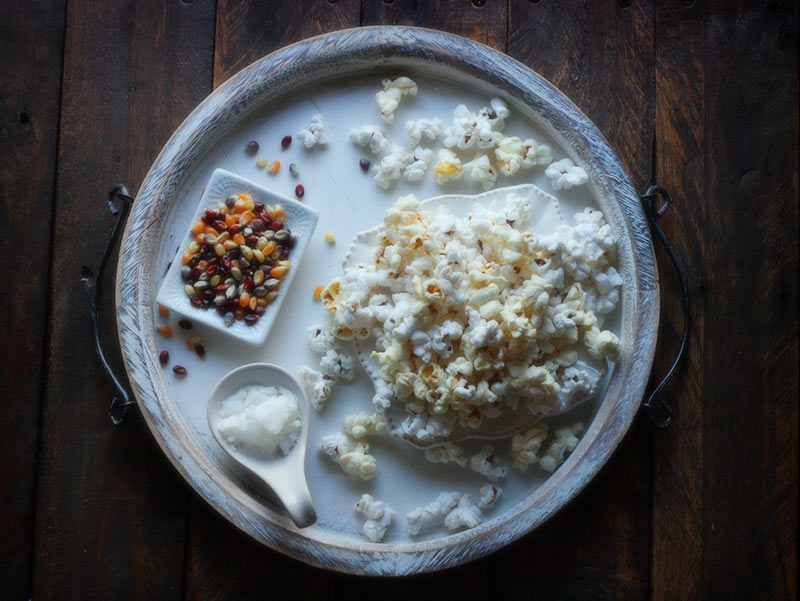 Confession time: my favorite snack is actually potato chips. That one food/desert island scenario? Potato chips. Delicious, crunchy, salty, addictive — and not healthy, any way you look at it.

It’s been a struggle to find replacements as satisfying. I haven’t landed on one, perfect option, but I did discover that having a choice keeps me from making a bee-line to the grocery store for that magical bag.

Looking over this list that I assembled over the months, I notice there’s not one sweet thing here (not even granola bars, which surprises me). I guess I’m just a salty-savory girl.

And so, there’s popcorn! Love the popcorn. Not the stuff that comes out of the flat-folded microwave bag and gives you popcorn lung. No, freshly popped popcorn that !pings! noisily in a lidded pot.

Never made fresh popcorn before? It’s super simple: in a medium pot with a lid, pour in enough canola oil to thinly coat the bottom of the pan. Heat on medium-high until the oil begins to shimmer. Add a heaping 1/4 cup of popcorn kernels and shake the pot around so all kernels are resting in a single layer. Cover, and let it heat. Once the kernels begin popping, give the pan an occasional shake. When the popping subsides to a one or second pause between pops, remove the pan from the heat and dump the popcorn into a bowl.

Trying to avoid oils altogether? Dump the kernels into a plain brown paper bag. Fold the top over like you’re sending your kid off to school with a bagged lunch. Heat on high in the microwave for 2:30 minutes. Stay close! Once the popping slows to a one or second pause between pops, stop the microwave, regardless of the time (you don’t want to scorch the kernels). Remove the bag and unfold carefully – the steam will be hot! Add your seasonings, and enjoy. 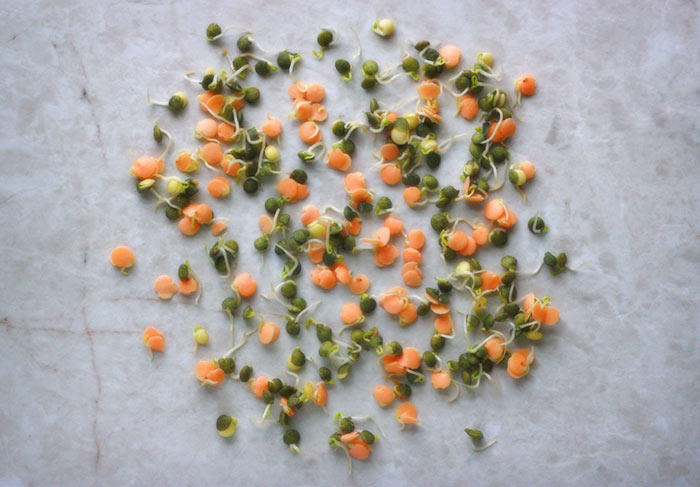 Sprouts! Sprouts are great for when I have an undefined hunger, and really just want something crunchy (like potato ch… no, bad girl! No chips!) Sprouts are easy to grow (although do note they have to be done in advance – I talk about sprouts here)

Lentil sprouts (red and green French shown above) are my snacky favorites. You can munch them by the handful, they have a great crunch and texture, and I enjoy their sharp lentil flavor. 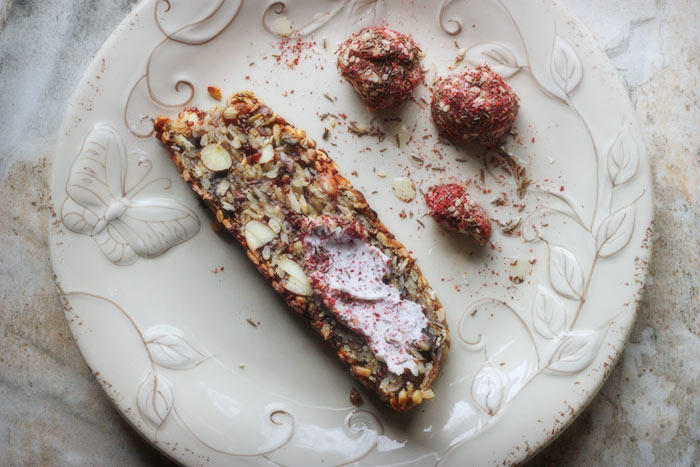 Ah, labneh. I had never heard of labneh until my friend at writes4food.com wrote about it some years ago.

A Middle Eastern cheese, labneh is made with yogurt, and the result is cream-cheesy goodness with a yogurt tang and yogurt health benefits (i.e., live cultures). And it’s super easy to make: spoon plain yogurt into a double-thick-cheesecloth-lined strainer. Nestle the strainer into a bowl, and put the whole thing the fridge for a couple of days. The whey (the liquids) will drain off leaving behind rich, creamy (but firm) labneh.

Tip: labneh can be made in 24 hours if you start with plain Greek yogurt, which is already partially strained.

My favorite use for labneh is to roll the cheese into balls, and then roll the balls around in a spice mix (I love za’atar, shown above, a tart-savory combo of sumac, thyme, sesame seeds, and salt). Spread it on crackers or crusty bread (like this nut and seed loaf).

It makes a beautiful appetizer for company, and a downright tasty snack when you feel like something decadent that won’t send you off the rails. 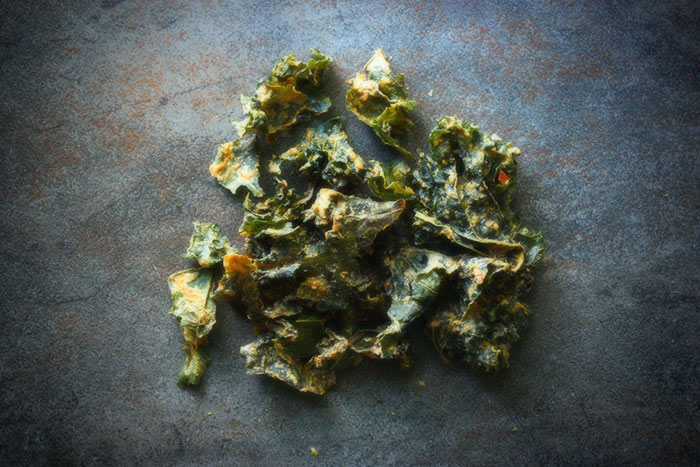 Kale chips were all the rage on food blogs this past year, and for good reason:  Dang, they’re delicious! I’ve got kale to spare out in the garden, so a savory afternoon snack is only a few steps out the kitchen door, a quick washing, a drizzle of olive oil, a spritz of salt, and a cozy turn in the oven away.

But. Packaged kale chips from the health food store (from brands like Brad’s) brought about an entirely new kale addiction. Rather than baking kale in the oven, kale pieces are coated in a thick, addictive mixture of herbs, vegetables, and seasonings, and dehydrated in a dehydrator (which crisps everything up perfectly with no scorching — a common problem in some ovens — while retaining a technically “raw” status). Whole. new. world. of addictive goodness.

I love these packaged chips so much, and that motion of reaching into the box, pulling out a chip, and shoving it into my mou’f is so familiar and comforting (potato chips! down, girl!). They are, however, quite dear. A 2.5 ounce container runs about $8, so they’re a treat rather a staple. (I’ve been experimenting with dehydrating kale chips at home — I’m close, but not quite there yet.)

Just like potato chips, the kale chips crumble in the package and settle to the bottom in the form of flakes. No matter, I get those, too, one way or another (that’s why nature gave us fingers). 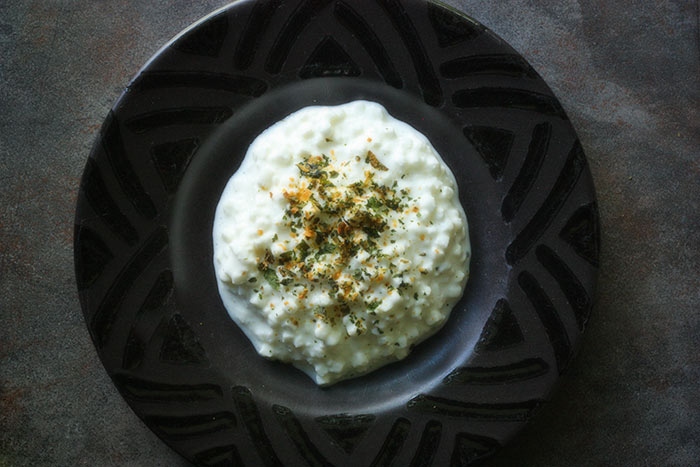 You know how carnivores are always all like, you veggie people need more protein!? Meet cottage cheese. I’d drifted away from cottage cheese in recent years (for no specific reason), so on a recent shopping trip, I did a double-take on the container’s nutrition label: 1/2 cup of 2% cottage cheese has 15 grams of protein for just 100 calories.

I quickly swapped out my standby blueberry Greek yogurt (which isn’t terrible on calories or protein, but does have added sugar) for my late afternoon snack before hopping on the treadmill.

Oh, and you know those aforementioned containers of kale chips, how they collect all the crumbies on the bottom, and you sit there, licking your finger and jamming it into the corners, to catch every flake? No more — I just sprinkle the crumbs on my cottage cheese, and boom, it’s perfectly seasoned. 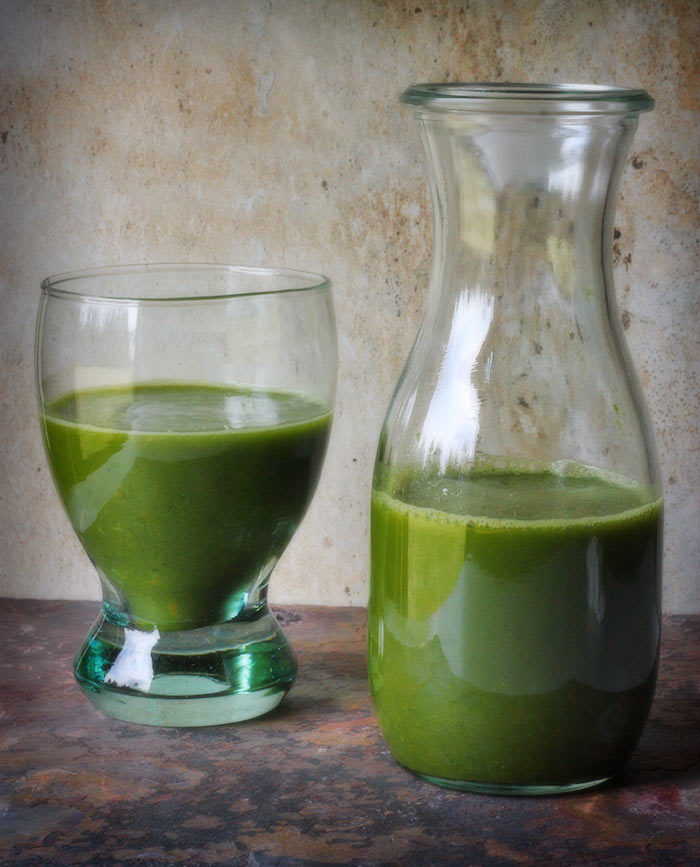 Finally, my favorite of all favorites: freshly pressed vegetable juice. I’ve written (gushed, more like it) about this recently (including a recipe), so I won’t force you to endure more declarations of love. It’s my unapologetic addiction, and my fondness for it has only grown deeper since I’ve been able to use fresh vegetables from my own garden.

What are your favorite healthy snacks?