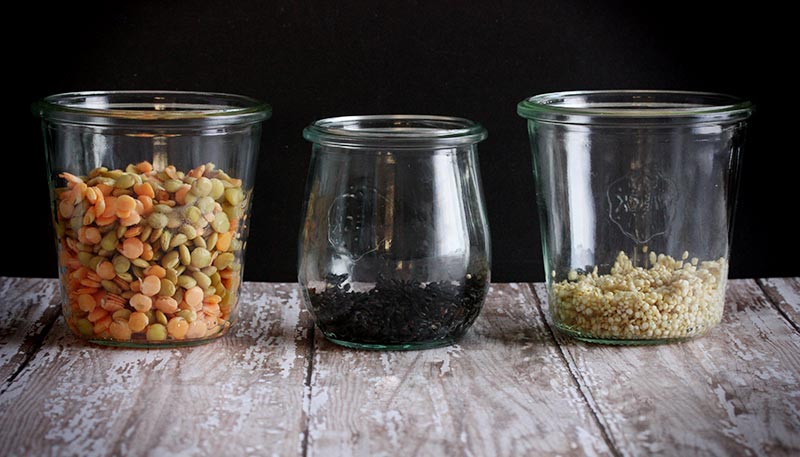 I’m always late to the party. Trends arrive, sparkle, shout, wave, fade, and get booted out long before I even poke my head out of my cocoon and go, “wha? wha waz dat?”

Sprouts was one of those parties. I’m sure they wove in and out of the health-foodie zeitgeist many times over before I finally heard the [click!] and put on my party hat.

It was their banning, I think, that finally drew my attention. Typical Western human. We don’t care about something until we’re not allowed to have it anymore. “No more sprouts! What? {creepy exorcist voice} I. must. have. them!”

There’s no need to fear growing them at home, however. Simple steps followed consistently will produce safe sprouts.

So, what’s the big deal with sprouts, I wondered? I hunkered down into research mode and discovered some rather convincing facts.

A sprout is, very simply, the coming alive of a seed. This awakening both requires and expends a lot of energy. The seed, thanks to water, self-nourishes, revving up the energy within in the form of vitamins, minerals, and amino acids. (So much energy, in fact, that sprouts are often warm to touch, giving off heat in their rapid growth cycle.) Most sprouts contain significantly higher levels of good stuff than even their fully-matured fruits. So, ounce for ounce, broccoli sprouts are more nutritious than broccoli florets. Take moment to dig that groove. 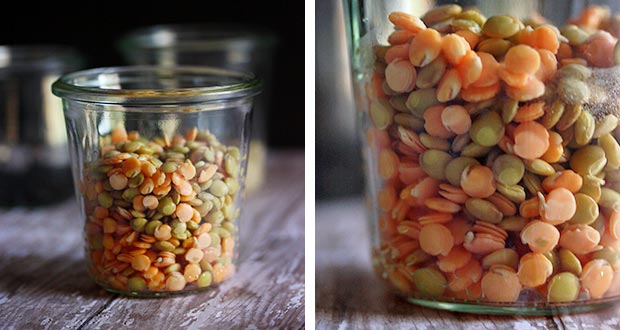 1. Add the beans/legumes/seeds to a clear container (a mason jar is perfect) and add cool water to cover by several inches. Cover the container with cheesecloth or plastic wrap with numerous holes poked in it. Place the container in a darkish corner on the counter where it can sit undisturbed while the sprouting action occurs.

3. Repeat the rinse/drain cycle every 8 to 12 hours, until they’ve sprouted to the point where they taste their best. Sprouts are edible after their initial soak in step 1. Taste after each rinse/drain cycle — some cycles produce very subtle flavor changes, while others are more pronounced.

4. After the final rinse, I like to spread out the sprouts on a paper towel for another 4 hours to dry off — they should be dry to the touch before storage. Place the sprouts in a ziplock bag or a sealable container and store in the fridge. Some sprouts stay fresh for a week; some longer. But of course, if your sprouts show sign of mold or rot at any point in their development, toss them out and start over.

The lentils in the 2 photos above were taken 2 hours after their initial soak (about 14 hours in). The three photos below, after three rinse/drain cycles (about 36 hours in). The quinoa was fully sprouted at about 24 hours; the lentils, perfect at 36, with 1/4″ sprouts. 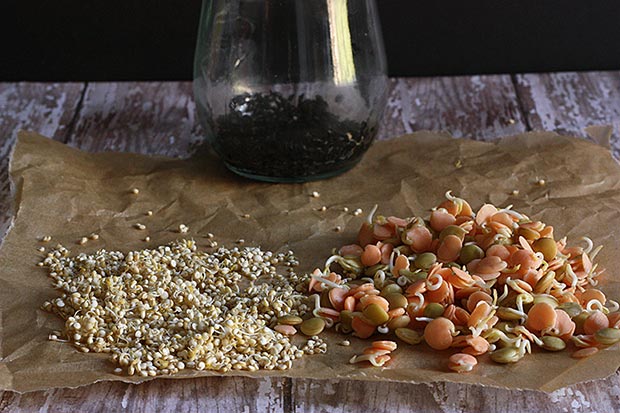 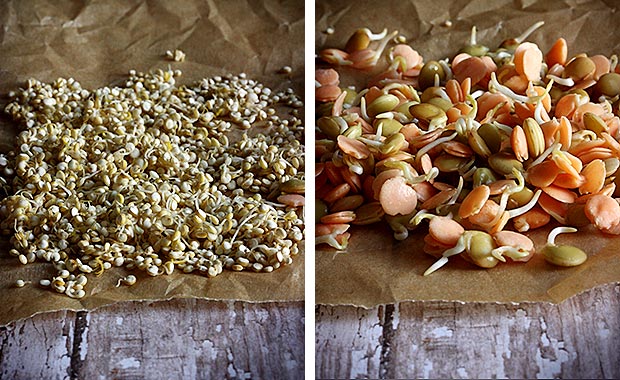 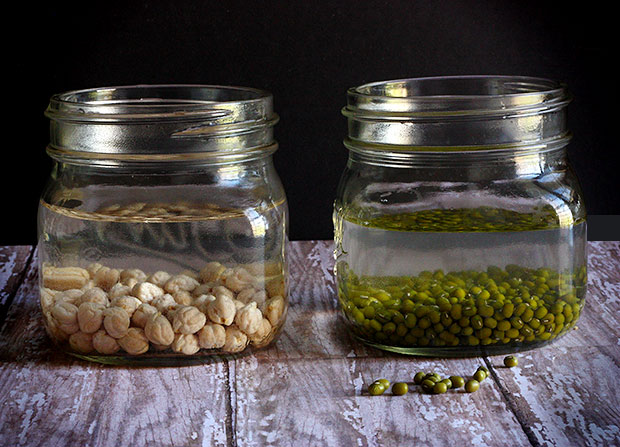 Chickpeas and mung beans, dried (above) and sprouted (below). Chickpeas take considerably longer than lentils to sprout to a yummy 1/4″ length — about 3 full days. Mung beans sprout slower than lentils, but faster than chickpeas — they finished up at the 48 hour mark.

The long, thick mung bean sprouts that we commonly know from Asian cuisine take much longer to produce (and, as I’ve read, is quite difficult to match in a home environment). The procedure for long sprouts, such as mung and alfalfa is slightly different — and I haven’t tried it yet — so I’ll refer you to sproutpeople.org — a veritable encyclopedia of sprout information — for instructions and pictures. 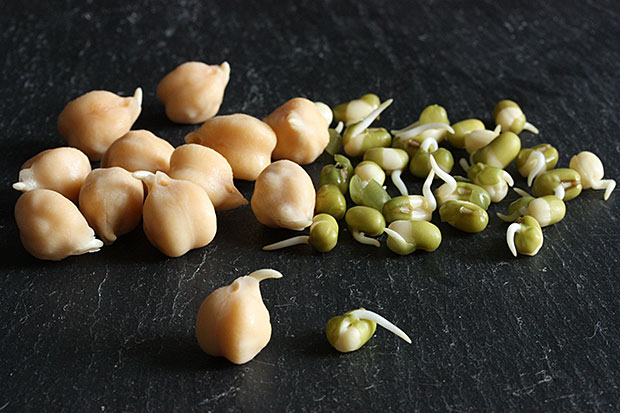 Of all the reasons to grow and consume sprouts, the best is the health punch that they pack. It’s said sprouts helped save 18th century sailors from the deadly ravages of scurvy, when their years-long oceanic voyages kept them from ingesting sufficient amounts of Vitamin C.

Quite a feat for such a tiny thing as a sprout.

Sprouts are considered as wonder foods. They rank as the freshest and most nutritious of all vegetables available to the human diet. By a process of natural transmutation, sprouted food acquires vastly improved digestibility and nutritional qualities when compared to non-sprouted embryo from which it derives….

Sprouted foods have been part of the diet of many ancient races for thousands of years. Even to this day, the Chinese retain their fame for delicious Mung bean sprouts. Sprouts provide all the essential vitamins and minerals. They should form a vital component of our diet. Sprouting requires no constant care but only an occasional sprinkling of water….

There is an amazing increase in nutrients in sprouted foods when compared to their dried embryo. In the process of sprouting, the vitamins, minerals and protein increase substantially with corresponding decrease in calories and carbohydrate content….

The increase in protein availability is of great significance. It is a valuable indicator of the enhanced nutritional value of a food when sprouted. The simultaneous reduction in carbohydrate content indicates that many carbohydrate molecules are broken down during sprouting to allow an absorption of atmospheric nitrogen and reforming into amino-acids. The resultant protein is the most easily digestible of all proteins available in foods.

The verdict’s in: I {heart} sprouts.

I can tell you, though, that you probably won’t enjoy eating them out of hand unless you already have an affinity for raw vegetables. Sprouts are astringent, very vegetal. Green, grassy. Wonderful.

If raw veggies aren’t your thing, sprinkle sprouts over your salads and stir fries. Layer them in a sandwich.

Here are some notes from my first little science experiments:

Next up: broccoli and radish sprouts!