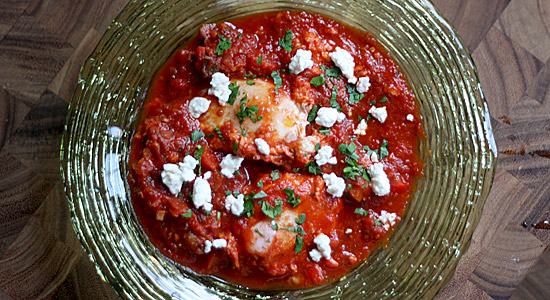 2011 marks my first year growing eggplant. I’ve had an odd relationship with eggplant, unable to decide whether I really like it or merely tolerate it.

The jury’s now in: thanks to some very tasty crops, I have to give it the thumbs up. I should’ve known it would find my favor: it’s a member of the nightshade family, which includes tomatoes, peppers and potatoes — my very favorites.

Like many summer vegetables, eggplant takes right to the grill, absorbing smoky notes that accent its summery squash flavor. It also takes right to one of my favorite fast dinners: shakshuka.

Never had shakshuka? What?!

Well, let’s fix that right now. Shakshuka is an Israeli egg and tomato dish. It cooks up fast and is a comforting meal at the end of a long day. Although I prepare shakshuka all year long, summer really smiles on this dish. Fresh vegetables grilled over an open flame heighten the savory kick of peppers and eggplant. When fresh heirloom tomatoes are plentiful (and they’re just starting to ripen in quantity here), I grill those, too.

Serve with a side of a pita bread — grilled, of course — brushed with oil and sprinkled with zatar. (I also made grilled eggplant dip with the extras I had.) 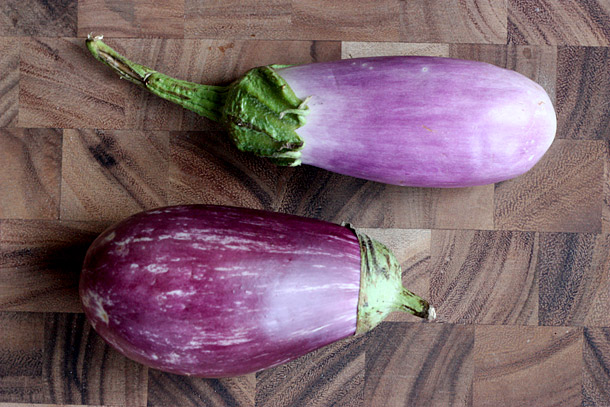 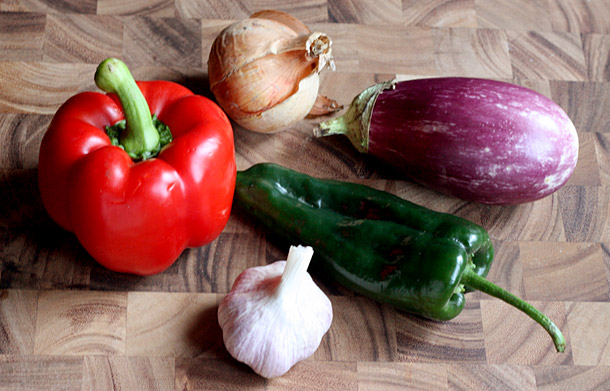 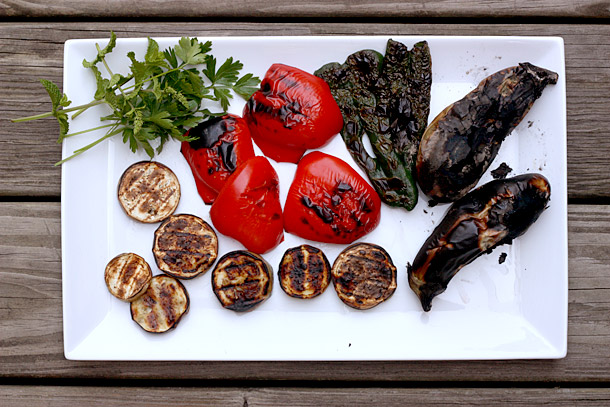 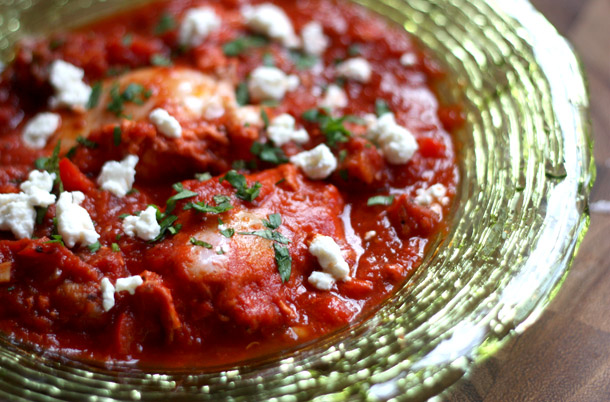 Serves 2 hungry people (2 eggs each), with some leftover sauce, or 4 for a light supper

Prepare your grill for direct cooking. Add soaked wood chips, if desired. Brush eggplant and peppers with olive oil and arrange on the grill. Turn when the cooked side shows a medium char. Remove each from the grill to a plate as they finish cooking (eggplant will likely take the longest, 10-12 minutes). When cool, remove any loose skin on the peppers. Chop eggplant and peppers into medium sized dice.

Heat oil in a deep skillet or dutch oven over medium heat. Add onions and cook, stirring occasionally, until soft and golden brown, about 6 minutes. Add garlic, cumin, and smoked paprika, and cook, stirring frequently, until garlic is soft, about 2 more minutes. Stir in eggplant and pepper until well mixed. Add crushed tomatoes to pan along with 1/2 cup water. Turn heat to medium-high until the sauce begins to bubble, then reduce back to medium. Simmer, stirring occasionally, for 10 to 15 minutes. Taste and add salt to your liking.

Crack eggs in to sauce, evenly distributing them across the sauce’s surface. Cover skillet and cook until yolks are just set, about 5 minutes. Using a spoon, baste the whites of the eggs with tomato mixture, being careful not to disturb the yolk. Sprinkle shakshuka with feta and parsley and serve with pitas.

*If you’re grilling the tomatoes, leave the skin on until after they’ve cooked and cooled. Whether you remove the seeds is up to you — personally, I like them.