First seed sowing of the season 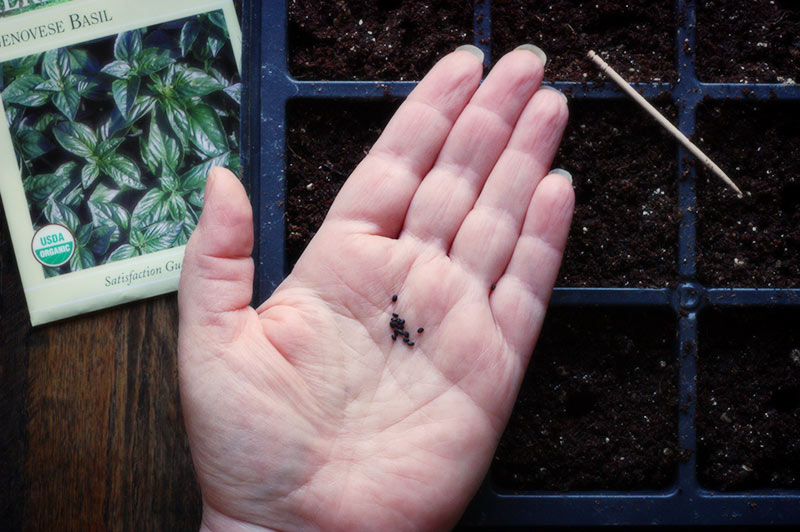 Being a summer girl, one thing and one thing only makes dreary, bone-chilling winter tolerable: indoor seed starting. By Feb. 1, I’m chomping at the bit, obsessively marking days off the calendar as a count-down to when I can begin the first of the year’s crops.

And, this past weekend was that time — {squee!}.

It’s early, for certain, so I start with just leeks and basil. Leeks require a crazy-long growing season — 6 to 7 months — before reaching that thick, luscious onion-garlic scented stalk we all know and love. Likewise, germination is crazy-erratic, so a long lead-time gives wiggle-room for reseeding, if necessary.

And basil. Oh, my lovely basil. Since basil grows so well indoors, I start seeds now — those are Genovese basil seeds in my hand, above — knowing the plants will be quite large by the time they’re ready to go outside. 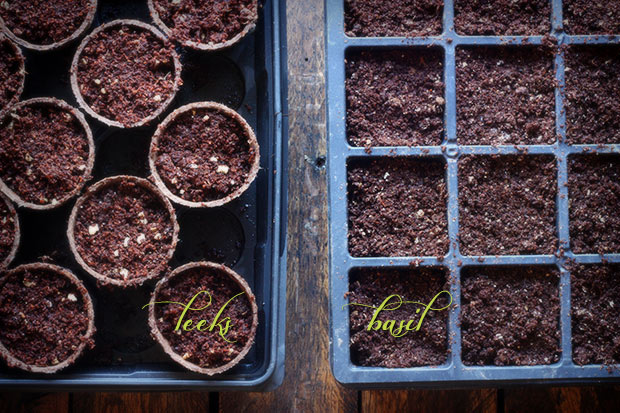 Since leeks and basil will spend quite a bit of time in these containers, I use slightly larger seeding mediums here than I do for my other plants. Above, left, each leek seed gets its own 2″ peat pot. On the right, basil goes into seeding trays with 2″ square cells.

As I mentioned, germination of leek seeds can be wildly unpredictable. Not poor, per se — the seeds usually sprout — just not on any kind of dependable schedule. Last year, the first seed set I sowed showed signs of nuthin’ after three weeks. Not a single sprout. Bum seeds, I concluded. I purchased new and stuck one seed into each of the existing pots. Within a couple of weeks, both the new and the first set of seeds had sprouted, and I ended up planting a double leek garden (such a terrible problem for a gardener to have ;^) ).

Leeks remain in these little pots until May or June, when they’re pencil-sized and can be transplanted directly into the ground.

Basil, in direct contrast, grows like gangbusters. I haven’t checked yet this morning, but they’ve probably already sprouted, and will continue steady, robust, heavenly-scented growth through fall. The little champs.

Basil remains in their trays until they’re a bit bushy, and then I transplant them to 4″ pots, where they’ll continue their growth until they go in the ground in mid-May, when all chance of frost is far in the rear view mirror. 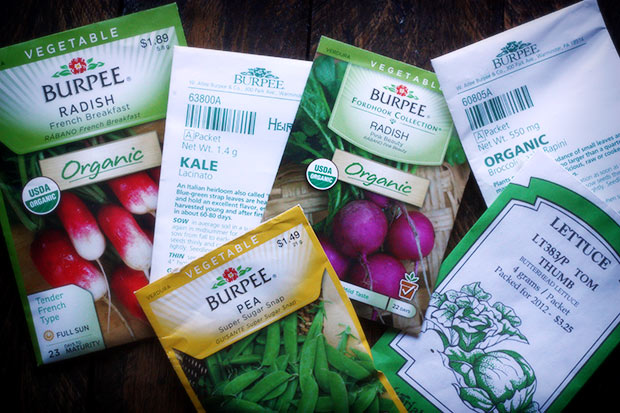 As February winds up this week — woot! — I’ll be keeping a close eye on the weather reports, waiting for my chance to get outside and sow some spring seeds.

But, even if March comes in like a lion, I’ve saved some tall kitty litter containers that I plan to employ as mini-greenhouses. I’d love to get a jump on kale and spinach — with my new juicer, I go through bags [plural] every week.

And now that I think about it, I should probably add a new juicer garden — with kale, spinach, romaine, carrots, cucumbers, and celery — to my yard. Hmm, must ponder that one. 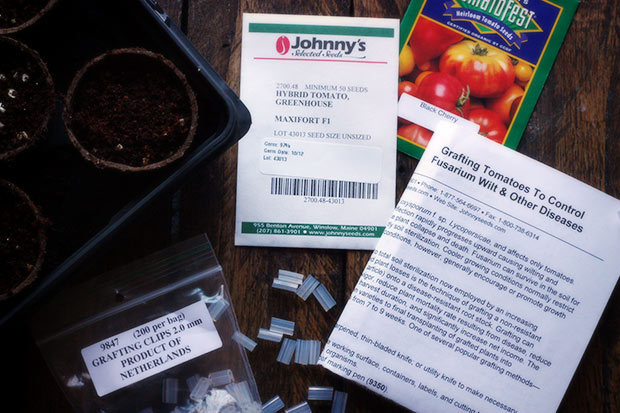 And, my new garden project for the year: grafted tomatoes.

I’ll be writing more about this soon, but here’s the short story:

Heirloom tomatoes — the varieties I mostly grow — are highly susceptible to tomato diseases that not only take down the entire plant before I’ve had my share of tomatoes (although, honestly, I never have my share of fresh tomatoes), but also live in the soil for years, easily surviving our winters.

I also live near a community garden — my property butts right up against it, actually — and diseases from the plots in that garden make their way into mine, courtesy of wind and insects. It’s a never-ending battle.

Grafting is a technique where two types of tomato plants are grown simultaneously: (1) a super-hardy, disease-resistant variety (I’m using the Maxifort variety) that grows strong and clean, but produces terrible tomatoes, and (2) your favorite tomato.

Then, when the plants have about 6 or 7 leaves each, you slice off the tops, and fuse the top of your favorite tomato to the base of the disease-resistant variety. Once healed and planted, the tasty tomato-producing top will inherit the hardy disease resistance of the rootstock, and will grow big and strong and lush with fruit, while — hopefully — thwarting catastrophic diseases like wilt and blight.

It sounds like the stuff of science fiction, but vegetable and fruit grafting has been around for ages. In fact, our modern apple trees are grown grafted: it’s nearly impossible to raise a healthy apple tree straight up from seed anymore, especially for growers trying to limit the spraying of pesticides.

I’m really excited about this experiment. I hope it works! More to come soon — I’ll be sowing the tomato seeds next weekend, and the actual grafting should occur sometime in April. Cross-fingers!