A few years ago, I decided to up the homemade ante and try my hand at making cheese. Like my butter project (if you can call 20 minutes a “project”), I wanted to learn for myself just how hard it is to create the magical substance that fills my culinary dreams.

It was summer, and I had loads of cherry tomatoes and basil on the counter. I wanted mozzarella. I needed mozzarella. And my cheesemaking book said it’s the easiest to make. I even had vegetable rennet on hand. Score.

The results were … [drumroll] … disappointing.

But not for the reasons you might expect. I made no technical errors, no measuring errors. No temperature errors.

No, this project was ruined by the U.S. food distribution chain and its food handling requirements.

But that was years ago. Thanks to the local movement, homemade cheese is finally within my reach.

It All Starts with Milk

Grocery store milk suffers the same failings as most of the other items dominating the shelves of modern supermarkets: it’s over-processed.

To survive the long journey from far away dairies, milk is heated briefly to a very high temperature — 275°, far above boiling — destroying as much microbial life as possible in a process known as UHT (or ultra-high temperature) pasteurization. This produces a milk product with a considerable shelf-life, up to 60 days.

It also produces a relatively flavorless milk, absent of beneficial microbes and enzymes. I call this ghost milk, milk that is a shadow of its former self.

Next time you’re at the grocery store, check the label of the milk product you’re purchasing. If it says “ultra-pasteurized,” you’re getting ghost milk/half and half/cream.

So, what does this have to do with my initial failed mozzarella cheese experiment?

Ultra-pasteurized milk is deficient in the enzymes required to produce a good, smooth-curdy cheese. I searched high and low for un-ultra-pasteurized milk (having been warned by the mozzarella recipe-writer) and met with utter failure. I bought a gallon anyway, and my first mozzarella test yielded a disturbingly stringy, grainy puddle that tasted like … nothing. So did the second test. And the third. 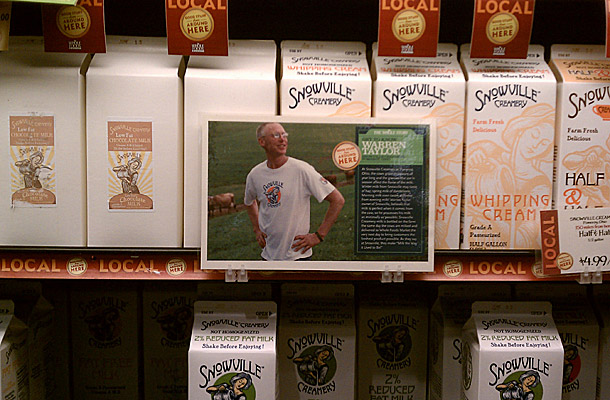 Skip ahead to today, and thanks to social media and the locavore movement, small dairies can make themselves known and attract a new customer base that was previously beyond the reach of their advertising budget. Through Facebook, I discovered an Ohio dairy that sells milk at stores mere miles from my house. Sensibly (read, not ultra), legally pasteurized and delightfully unhomogenized (you have to shake the carton). Real milk. I hadn’t drank a plain glass of milk in 20 years. I was hooked.

Enter Warren Taylor (above), CEO of Snowville Creamery in Pomeroy, Ohio. I took this photo at my area Whole Foods store. If I hadn’t already become smitten with Snowville through contact on Facebook, this sealed the deal. This is what I want to see from the people who produce the food I consume: responsibility — that’s the CEO’s own face fronting his product — and transparency. (I don’t ever recall seeing Jack DeCoster promoting the eggs he produced.)

One more thing before I get to the cheese: my favorite Snowville story. Earlier this Spring, a friend of mine noted that the color of her new Snowville milk was buttery yellow instead of creamy white. A quick question to and response from Taylor revealed that the cows had been grazing on dandelions in the fields. How awesome is that?

So, let’s try this experiment again, this time with Snowville milk. Vegetable rennet (on the right, above) will help move things along to their creamy end.

Ah! There they are! Curds, firm enough to slice with a knife. This critical step just never happened with ultra-pasteurized product. 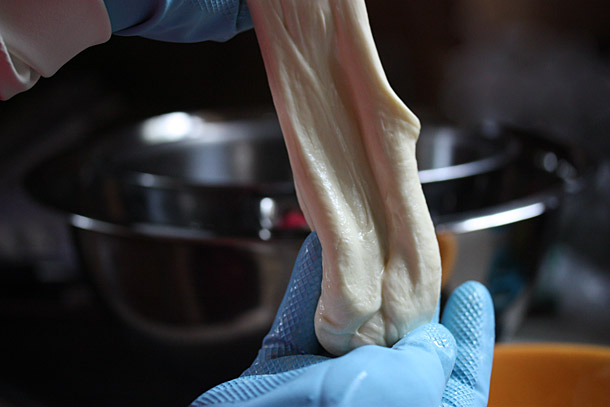 This is my favorite part — stretching and kneading the cheese. So achingly smooth and creamy. If it weren’t for the fact that the strand was 135° at this point (hence the gloves), I would’ve bitten off a chunk right then and there. 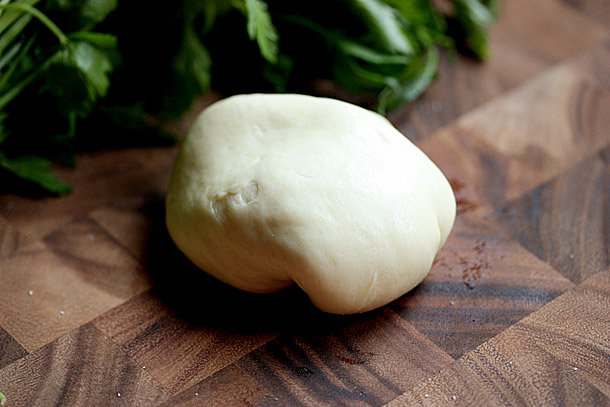 Oops! I was so excited to try the result that I forgot to photograph it before digging in. This is the smaller [ahem, much smaller], reshaped remains from my mozzarella feast. Delicious!

Havarti, you’re next, my friend.

For a step-by-step photo tutorial of the super-easy recipe I followed, visit Cheesemaking.com. While you’re there, browse the other recipes that Ricki includes on her site.