On Squash and Matchmaking

The first year I grew butternut squash, I was blessed with what you could only term Beginner’s Luck. I certainly didn’t do anything to deserve the harvest that resulted from my accidental efforts.

And the one conscious decision I made that seemed right was also laughably wrong: I planted the seeds smack dab in the middle of my garden, leaving not nearly enough leg room for happy vines that climbed everything vertical, including my tomato plants. This location, however, meant the plants would be right on the bee superhighway I had laid through my yard. Fluffy bumblebees and strictly-business honeybees hopped from oregano flower to pepper flower to dahlia to squash flower to lavender, picking up pollen here and leaving pollen behind there.

It was a huge, beautiful harvest. 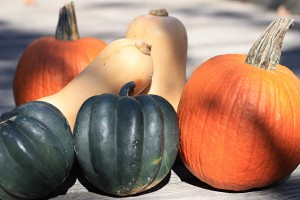 The following spring, still a bit grumpy from unwinding all the stubborn, prickly vines from my heirloom tomato plants the previous September, I moved the butternut plot to its own little area off to the side. The harvest was okay. Nothing to shout about. I was more concerned with the fact that squash vines were still gunning for the tomatoes. It was amazing. Given the three directions the vines could choose to trail, they all went right for the tomato plants some 12 feet away. Apparently, even butternut squash cannot resist the sirens’ song of an heirloom tomato.

So, the following year, I moved the butternuts to the front yard in a huge patch recently cleared of ground ivy. There, I thought, they could roam free while leaving my tomato plants the hell alone. Disaster.

By July, I had not one squash, of any size. Flowers, yes. Squash, no.

Some quick research revealed the problem: thinking I had created a better environment for all of my plants, I had, instead, removed the squash flowers from proximity to the bee superhighway in the back yard. The flowers simply weren’t being pollinated. Most plants in the Cucurbita genus (which includes squash, cucumbers, zucchini and pumpkins) produce both male and female flowers, and depend on insects to transport pollen from male to female into order to set fruit. But with the delicious pollen and nectar smorgasbord going on in the backyard, bees had no interest in exploring the front yard. So, no squash.

I blinked twice at the web site that explained what to do, then went to find the old oil brushes I had abandoned after discovering an incredible lack of painting talent.

Armed with a paintbrush and tip-toeing through the early morning dew, I suddenly found myself in the curious position of being sex therapist to four butternut squash plants.

But the advice on hand-pollination saved the harvest, and I’m here today to pay it forward. It’s quite common for Cucurbita to struggle with pollination issues, despite [sub]urban legends of zucchini harvests so large that communities lock their car doors at night, lest they find them stuffed to the rear view mirror with excess squash from desperate gardeners.

If your squash production is lagging behind on otherwise healthy plants, a little matchmaking may be in your near future. 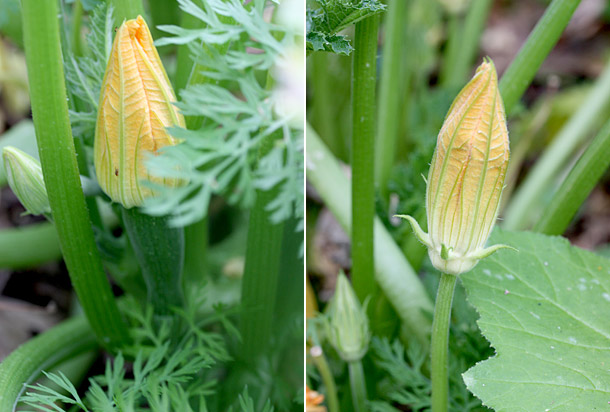 Male flowers will always outnumber female flowers by large margins, and usually begin appearing far in advance of the first female flower. This is nature’s way of hedging its bet for a successful pollination. So don’t worry if it takes a while to locate a female flower. It’s normal. 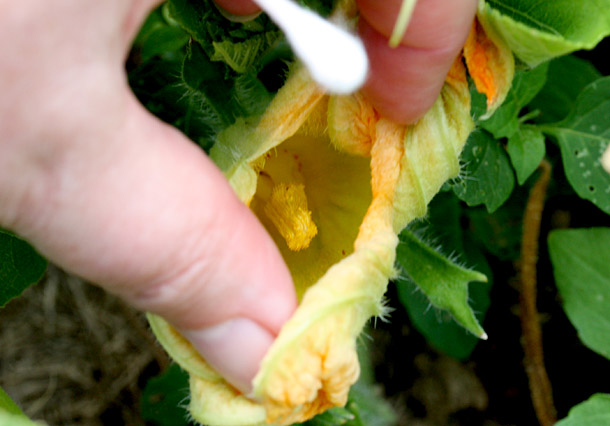 Cucurbita flowers open in the early morning and close by early afternoon: this is your only window of opportunity. In the photo above, I’ve pried open a closed male flower, strictly to show its innards. 3pm is not the time to be hand-pollinating your squash.

As an alternative technique, you can also remove the male flower from its stalk, pull off the petals and insert the male stamen into the female flower, ensuring that thorough contact is made between the stamen and stigma to transfer pollen.

That’s it! And you may now congratulate yourselves on your remarkable show of restraint in keeping those obvious euphemisms in check. I’m proud of you! 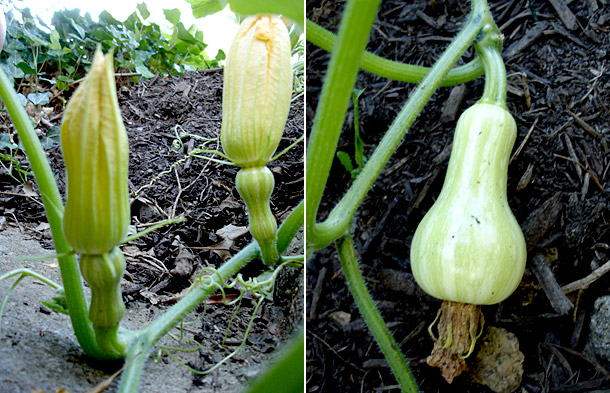 These photos (above) are from that third planting I mentioned, when I spent the late summer hand-pollinating every female butternut squash flower. Left, two female flowers and their butternut embryos wait for their pollen injections. Right, a successful pollination sends the fertilized squash into grow mode mere days later, as the butternut sheds its no-longer-needed flower.

One final note: squash blossoms are a delicious delicacy, but be careful not to pluck too many flowers before your squash have had time to set fruit.