Surprises at the Grocery Store

Several years ago, I had one of those jobs. You know, the worst job you’ve ever had. Everybody has those. The stories we could share, right? And one of the many pains of this company was the person responsible for the software budget, officed in Cupertino, CA. Silicon Valley. Headquarters of Apple. Once ranked #2 by Forbes as the most educated small city in the U.S.

Anyway. One day, an emergency project came along in our little ole Northern Kentucky office, and I needed Photoshop. I called “Dano” [name changed, etc.] to get approval before running out to purchase a thousand dollars worth of software on my personal credit card.

His reply: “Of course it’s approved!” he chirps happily. [Long pause.] “I’m just not sure how to get it to you.”

Dano: “Well, it’s a really large download and could take a while.”

Me: “What do you mean, ‘download?’ I’m not going to download this thing — that would take hours on our office connection. I’m just going to run out and buy the box.”

Dano: “Um, how do I put this? Do you guys even have software stores out there?”

So, what’s my point, you ask, Patient Reader? Irony, is my point. Oh, the irony. 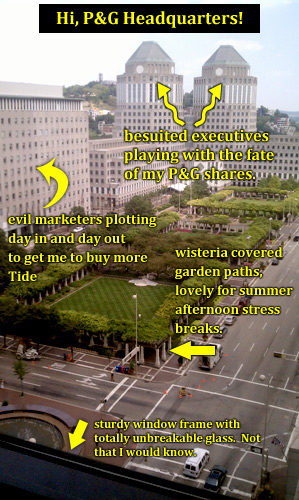 While I do believe (and hope) that Dano’s ignorance of American geography and sociology was uniquely acute with him and only him, I do understand the general stereotyping of us “flyover states.” Yes, Ohio has a lot of farmland. But like every other state in this vast union, we do have cities … with ‘lectricity, software stores, Starbucks and everything.

In fact, I can see the international headquarters of Procter & Gamble from my office window, and Kroger’s headquarters is just a 5 minute horse-and-buggy ride from the livery.

No, the irony is that, here in the 21st century technology is always butting up against the natural world, and cities like Cincinnati often get the short end of the stick.

On the one hand, there are the Dano’s who think we roll off of a hay bale every morning at the crow of the rooster and plant our overalled butts in front of our Commodore 64s (as if anyone does that any more. Everyone knows that Windows 95 is where it’s at, man). But on the other hand — and even worse — there’s Kroger.

Kroger, who orchestrates a massive, twisty supply chain yarn ball to all points on the globe from this flyover city, can’t see the forest for the trees. Kroger, who is surrounded in every direction by farm land nurturing the most amazing local, organic crops of tomatoes and corn and berries and apples, still insists on bringing in produce from everywhere except here.

Imagine how thrilled I was to round the corner at Kroger, fresh from a stop at the farmers’ markets to pick up local San Marzano tomatoes for canning and other yummy heirlooms for salads, only to be faced with this display. In the lobby, no less, right next to the shopping carts. 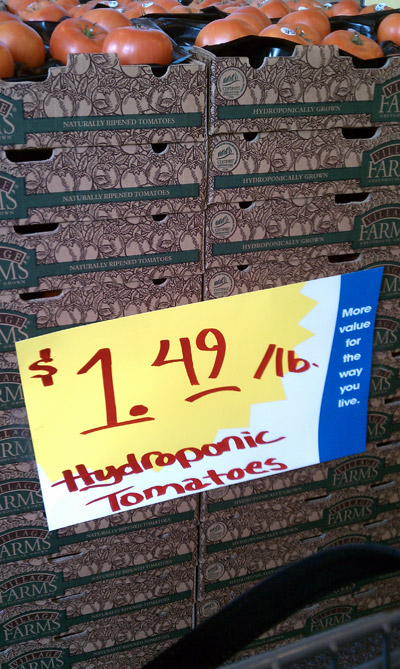 Hydroponics? In August??  In the Midwest??

Really, Kroger? Really? I have a bagful of Brandywines in my car. Do you want me to bring them in, set them up? Can I make some introductions between you and the spectacular farmer who grew them? Because I know his name, even if you don’t.

Dano would be shocked (mostly to learn there are paved highways leading to Cincinnati).