The sad truth about orange juice 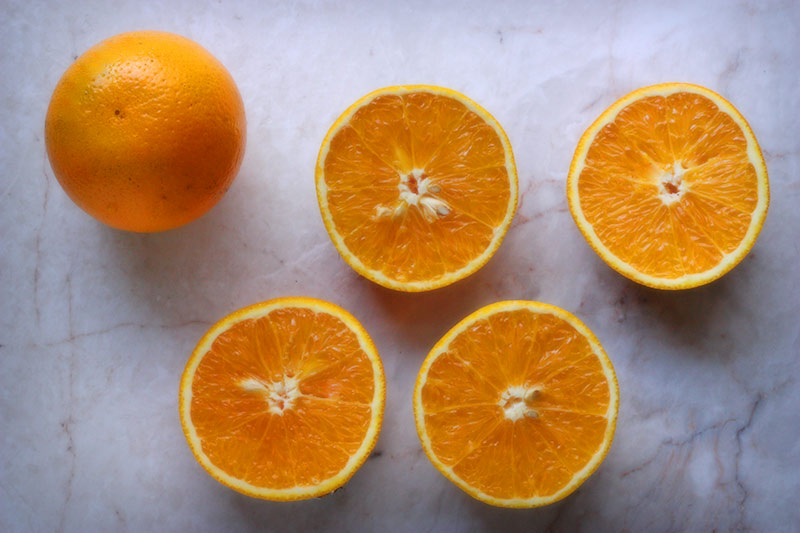 Being that now through May is Valencia orange season in Florida, and that these delicious globes of sunshine are stacked high in netted bags at the store — irresistible, ready for fresh squeezing — I wanted to share with you a bit of the underbelly of the juice industry, and how those ubiquitous cartons at the other end of the store get from grove to market. Forewarning: it isn’t pretty. And whenever I juice these oranges, filling my kitchen with bright aromas of citrus and summer, I despair a bit at how we arrived at this sorry state.

Commercial orange juice production has a long, checkered history. I haven’t consumed it since the 1990′s. I’d like to say I already had the spark of food activism back then, but the truth was, I just didn’t like it. The texture was never right — either too thin or too syrupy — and it usually served only to make me more thirsty.

Back then, I had a job in the IT department of a large law firm that was defending consumer goods giant, Procter & Gamble (whose headquarters is in my hometown, Cincinnati), against a lawsuit claiming fraud and deception with regard to their orange juice brand, Citrus Hill.

The core of the suit revolved around P&G’s use of the term “fresh” to market and label its Citrus Hill juice, while the juice was actually (and admittedly) reconstituted from frozen concentrate. At the time, we consumers were shocked. Not just at P&G, but at the entire industry, since all companies used concentrate for their juices, but didn’t label it as such.

It pales, of course, to what we now know is in our food, but at that more innocent time, frozen concentrate seemed a blasphemy and a betrayal to the consumer. It suddenly made perfect sense to me why commercial juice tasted nothing like freshly squeezed: it wasn’t freshly squeezed, not even close.

Simultaneous to this court action — and more significantly so — the FDA was trouncing all over P&G for this very issue, “fresh” vs. “concentrate,” even going so far at one point as to raid a Minneapolis warehouse and seize crates of juice.

The “100% orange juice” industry was (and is) fiercely competitive with the big guns, Minute Maid and Tropicana, using every weapon at their disposal … especially words and phrases. P&G’s third-place Citrus Hill was arguably just trying to gain a foothold in the battle by incorporating “fresh” into its brand — a strategy, P&G contended, that was used by their competitors, up and down the ladder. The FDA agreed, but claimed it was too busy to proactively police the entire industry for misuse of the word “fresh,” whereas it already had P&G in its sights.

Eventually, these various external forces led P&G to discontinue its Citrus Hill brand, and all matters were closed. 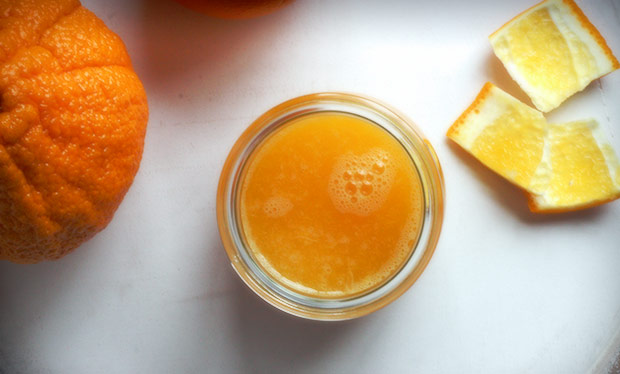 But even now, in 2013, the orange juice story is not over. Far from it, in fact. I say this because many of us scrutinize what we buy at the grocery store for artificial and suspect ingredients and are relieved to see the words “not from concentrate” on the orange juice container.

Even though P&G took the brunt of the fresh vs. concentrate scandal, the issue was not soon forgotten. With their masks stripped off, juice manufacturers began developing other methods for producing orange juice in the not-from-concentrate form we are now used to.

Wait, what the what? “Deaerated?”

The first time I saw the term, I had to look it up: A process that removes oxidizing air from the juice so it can be safely stored for a very long time — up to a year — in huge, aseptic tanks. 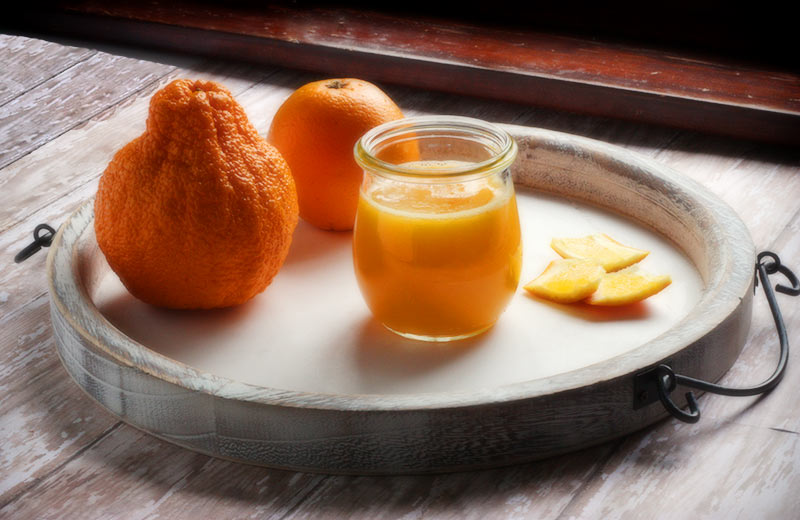 Here’s the summarized view of the process:

Juice oranges are shipped in from wherever oranges are in season (most often Brazil, which is the world’s largest producer of oranges for our juice — not Florida). The type of orange is inconsequential. We, the naive, trusting public would like to believe it’s always the Valencia orange, the best and most flavorful of the juicers, and always from our very own Sunshine state, Florida. But not always. Not even usually.

The oranges are squeezed and their juices go through pulp reduction, deaeration and pasteurization processes that prepares them for storage in aseptic bulk tanks.

Now, with the deaeration process having removed most of the “orange” flavor from the juice, manufacturers have to get that flavoring back in there; otherwise, the juice would be intolerable.

And so, they turned to the fragrance industry. The folks whose noses produced your favorite high-end perfume are the very ones who create orange juice flavors.

Ever wonder why your morning juice tastes the same, season in and season out? And why brands are distinctly different from each other?

Meet the flavor pack: a laboratory-produced concoction of carefully blended chemicals that taste and smell like fresh orange juice. (Excerpt from Hamilton’s book on deaeration and an interview.)

Manufacturers go to considerable lengths to perfect the essence of the orange in chemical form* and protect their unique signatures. (Small brands looking to break into the industry often hire fragrance houses with the instruction to mimic Minute Maid’s or Tropicana’s flavor packs.)

(* Orange juice does not get dinged by the FDA for artificial flavors because fragrance houses begin with natural orange essences and break them down into their constituent chemicals. From there, those chemicals are reformulated into flavor packs, which are then added back to the juice to restore flavor and aroma.)

And this is why I still don’t buy packaged orange juice: “natural” or not, it still doesn’t taste anything like freshly squeezed at home.

(And, as I mentioned, most juice oranges come from Brazil, where federal standards for safety concerning pesticides and other handling practices are much lower than ours. So, if you’re consoling yourself that at least your orange juice is safe, we can’t be certain that is the case.) 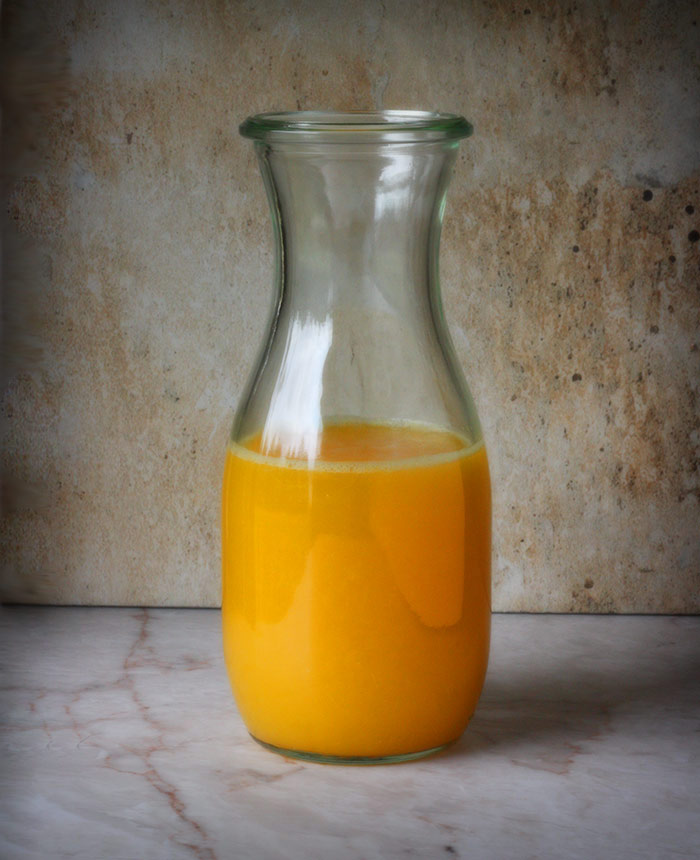 This, above, is a pitcher of freshly-squeezed Florida Valencia orange juice. Light, softly sweet, and thirst-quenching, it positively shames the thick, almost gritty, commercial juice. (The first photo at the top shows the oranges this juice came from.)

Valencia oranges are in season for the next month or so — seek them out, squeeze some fresh, and test the difference yourself. 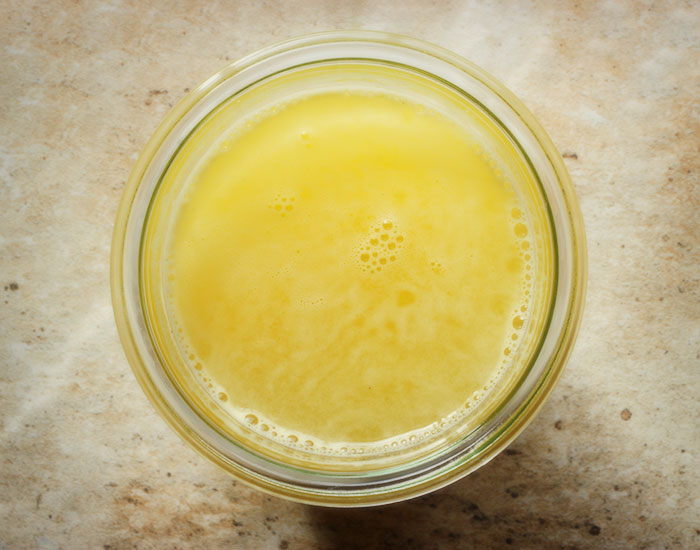 And while we’re talking about juices … in a similar vein, I’ve never liked apple juice. Dark amber and curiously syrupy, bottled apple juice was over-the-top gross. I couldn’t stand it, and still can’t.

Then I bought my juicer and tried freshly pressed juice from Honeycrisp apples (photo above) for the first time. Just look at that juice! Pure golden apple essence. And the taste … apple perfection.

I find it completely confounding that the juice industry has taken nature’s most gloriously flavored fruits and reduced them to a hot mess of weird and processed liquids. I understand the trials of mass production, product safety, and supply chain distribution, but, in my opinion, they should not be allowed to call it juice.