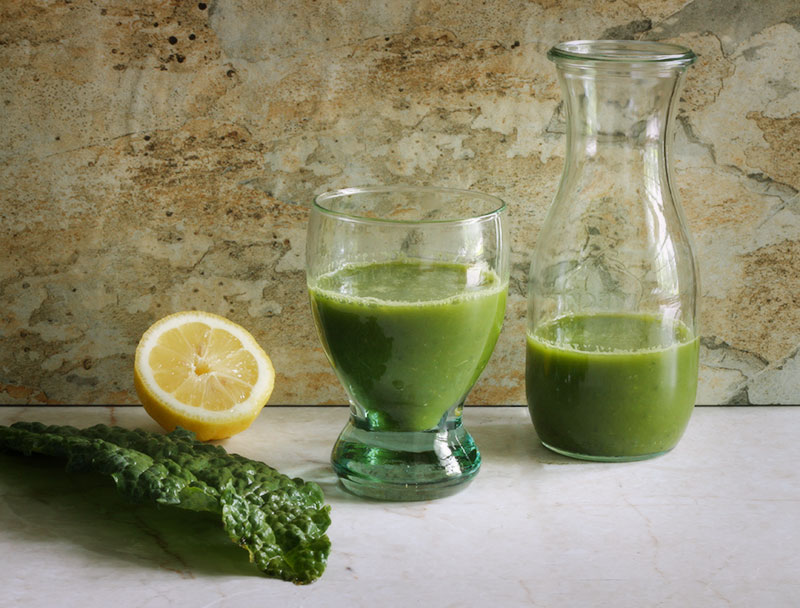 When I decided to follow a vegetarian diet two-plus years ago, it wasn’t for health reasons. So, my new way of eating wasn’t the healthiest — not terrible, but not a model of vegetarianism, either. Pasta was the automatic substitute for meat dishes. And when all else failed, there was bread. I consumed plenty of whole vegetables and fruits — I always have, actually — but replaced animal protein with lots of carbs in the process. I neither gained nor lost weight (although my cholesterol levels — which were already good — improved further, as did my blood pressure. A ringing endorsement, I think, for cutting back or giving up meat).

It was an easy transition, eliminating animal products, but over time, I realized I just wasn’t feeling as I should. Problems that were minor or infrequent eventually became nagging, annoying, concerning. I blame that on aging — not vegetarianism — I knew I had to make a change.

I began green juicing more or less to do a full-body “reset.” Some of the issues I was experiencing are better left for another post (marked, “Girl stuff”), but others, like bad skin (life-long rosacea, adult acne and dry, flaky skin), aching joints, an autoimmune disease that could fire up at any moment, persistent heartburn and digestive issues … I wanted relief — I wanted to just feel better — but I didn’t want to turn to western medicine (which tends to patch rather than fix, accumulating pill after pill in the process).

There’s certainly a lot of hype out there — a lot of hype — about eating a vegetable-strong diet, but some of it made sense to me. Particularly, that the health of one’s body, and the normal functioning of the immune system, begins in the gut and digestive tract, and that inflammation is the enemy.

I’ve written before about gluten, and the fact that I’ve cut back considerably on my daily consumption of it. That, alone, has made a difference in how I feel, every day — a big win against inflammation, which gluten is known to promote.

Fresh vegetable juice and green smoothies (sans dairy) have been the icing on the cake. This has been my personal project for 2013, so I thought I’d share the ways I’m getting more vegetables into my life — in liquid form — and what the effects have been.

(As with all things health-related, do not take one person’s experiences as a rule of law — consult your trusted medical advisers before radically changing your diet, especially if you take prescription medications.)

If it wouldn’t completely kill all credibility of subjectivity and levelheadedness, I’d film a video of me running around the kitchen in circles like a 4-year-old hopped up on Twinkies, hugging my juicer to my chest. (Also, it would go viral for all the wrong reasons — “See 40-something woman go crackers on green juice!” — and I’m pretty sure it wouldn’t help the cause.)

But, that’s how I feel about my juicer. Green juice has been a transformative influence, and I’m very grateful that I hit the “Add to Cart” button late one night, after two friends gushed about their new juicer. I worried it would become another appliance in the cabinet that I can’t reach without a step ladder; instead, it’s my daily tool to feeling better.

The best benefit of juicing is that it has completely reset my appetite. I no longer crave sugary, fatty foods (and honestly, they don’t even look particularly tasty to me anymore). I eat smaller portions at meals without feeling deprived. I didn’t even do a real juice fast — I just started drinking green juice between meals and at bedtime. The changes occurred slowly, almost imperceptibly, until I realized all at once that I wasn’t going back for seconds at dinner, and I wasn’t craving ice cream at night.

Other effects began to accumulate as well. I will never have super-model-smooth skin — not even laser treatments or plastic surgery will give me that — but my skin has cleared considerably, especially the rosacea. I used to get heartburn every morning about an hour after awakening. No more. I sleep well, and wake up refreshed. I’ve plowed through spring’s labor-intensive gardening tasks with great energy.

I know all of the arguments against juicing — particularly about the extracted pulp — so I’ve approached the whole thing as sensibly as I can. I drink freshly pressed green juice almost every day, but I do other things as well (below), including consuming more than the recommended daily allowance of whole vegetables.

I use very little fruit — just apples and lemons — to keep sugar rushes at bay (and avoid the calorie bombs of typical fruit-heavy smoothies). I alternate the greens and vegetables I use to get a wide range of nutrients.

I use lemon juice in every drink I make — it’s reported to cleanse the liver as well as to have an alkalizing effect on the body — and often add a splash of raw apple cider vinegar (which has a slew of health benefits of its own).

For folks worried about the taste … and concerned about the intimidating greeness of the drink … it’s really delicious. The flavor is controlled by the vegetables you add, not so much the leafy greens that contribute the color. I never notice the kale or spinach, but do notice the balance of carrots, cucumbers, ginger, and apple. You can’t go wrong if you use the vegetables you love.

And if you’re not a fan of the bottled green drinks by companies like Naked and Odwalla, take heart: I don’t like them either. (One of them, I can’t remember which, has garlic, and I can taste the garlic. It’s just not my cup of tea.) Fresh green vegetable juice tastes nothing like what’s on the commercial market (not even the salt-laden V8 juice).

My favorite green juice is a based on a widely-shared recipe: 5 or 6 kale leaves, a big handful of spinach, 1/2 of a lemon (peeled), 1 Honeycrisp apple, 1/2 of a cucumber, 2 stalks of celery, 1 small carrot, and a 1″ piece of ginger. (My homemade V8 juice rocks the party, too: to the above, add a handful of cherry tomatoes, a red bell pepper, and another carrot.) 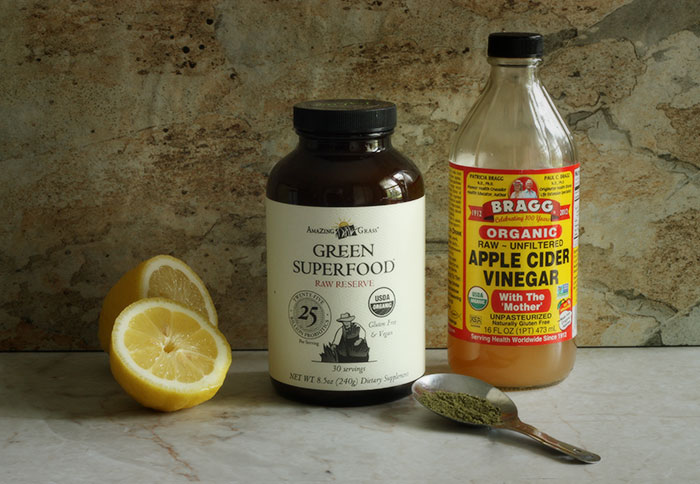 Vegetable powder was an accidental discovery. I was browsing through the health section at the grocery store, and impulsively grabbed a can of wheatgrass powder. I really had no intention of drinking it straight-up — I thought I’d add it to my green juice. That worked fine: I couldn’t taste it in the juice, and I got the extra nutrition benefits.

After some further research, I decided I wanted something that contained chlorella, a fresh water algae rich in chlorophyll (fights inflammation), vitamins, minerals, and amino acids. I stumbled upon the Green SuperFood Raw Reserve

brand on Amazon, and have been quite happy with it.

The flavor is much better than wheatgrass (although still, you know, very grassy), and it takes the pressure off of daily green juicing. I consume at least one glass per day, using this recipe:

(In the interests of full disclosure, if you make a purchase on Amazon via the links in this post, I get a teeny-tiny commission that will likely not be paid until sometime next year. But when it is, it will be funneled back into the costs of maintaining this site. And I’ll be ever so grateful that you clicked.) 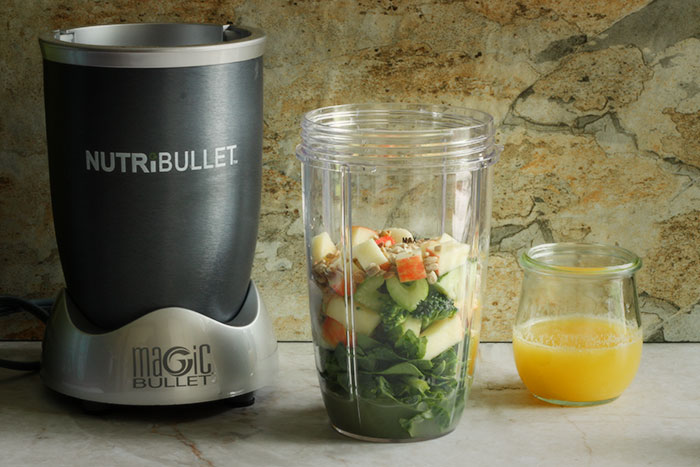 This was sort of an impulse, discount-I-couldn’t-pass-up purchase. I wasn’t seriously looking to buy one, but I got a fantastic deal — given the equipment I already own, I would not have paid full price, or even a run-of-the-mill sale price.

, are small units with a double-row of sharp chopping blades and a fairly powerful motor. You load the ingredients in the provided container — taking care to respect the Max Fill line — attach the blade base to the opening (it screws on easily), then invert and insert the unit onto the base, pressing down and twisting clockwise to lock in place. This twisting activates the blades when the base is plugged in. To halt the blending, twist the container/blade unit counter-clockwise. Up-end the unit, remove the blade base, and you’re drink is ready.

If you have a mega blender, such as a Vitamix or a Blendtec, you definitely don’t need a Nutribullet. You have all the power and chopping speed you need to make green smoothies, just in a larger appliance.

It does, however, perform better than my standard blender. My blender doesn’t completely break down leafy greens, so there are always flakes of spinach and kale in my green smoothies. The Nutribullet breaks everything down quite well.

I’m surprised how much I enjoy the convenience of it. Everything about it is fast, from the blending — just two 15-second pulses do the trick — to clean-up.

If you balance your ingredients, the drink is quite substantial — it’s a satisfying meal replacement. Since I don’t use dairy in my smoothies, the drink stays well-blended, and can store in the fridge overnight, or be transported for later consumption. (I’m personally not concerned about nutrients breaking down after hours of storage — I figure a fresh[ish] green drink is better than most of my other options, especially at work.)

Feedback comments on this unit at various online stores reveal a few problems, and an unsatisfactory product life. The unit will readily leak if you exceed the Max Fill line (easy to obey, though — I bow down to the great and mighty line, and haven’t had a leak). The unit loses power over time (although it’s not clear if it’s a blade issue, or a motor issue). And numerous people have reported back that the unit died within a few months. The manufacturer’s customer service is said to be fairly uncooperative, so I’m hoping I’ll be able to return it to the retailer instead. (Yes, I’m already braced for the unit to fail. Sadly.)

Lots of stuff comes in the box — stuff that is more of a nuisance to store than anything (but since I’m keeping the box for the inevitable return, they just live in the box). I wouldn’t trust the included lids to be leak proof. The smaller of the two containers is ridiculously small – it holds barely anything. Kid-size, I’m guessing. There’s a snap-on handle for both large and small cups — good for kids; I just find it bulky. Neither cup fits a standard car cupholder. The milling blade looks interesting, but I haven’t used it yet. The recipe book is a useful read. I don’t really use any of the recipes — they’re too fruit-heavy for my tastes — but they gave me ideas that lead me to the mix I use most often (below).

Despite these weird negatives, I really do like the unit. I appreciate the convenience and speed of prep, taking only a few minutes to slice up the small amount of vegetables that fit in the large container vs. the 15 to 20 minutes it takes prep all the veggies for my juicer.

My favorite Nutribullet recipe:
1 large kale leaf, torn into several pieces
1 palmful spinach, torn into smaller pieces
1/4 Honeycrisp apple, cubed
1/4 cucumber, cubed
a small palmful of other veggies I might have on hand, such as celery or broccoli
a small palmful of sunflower seeds
1 tablespoon raw apple cider vinegar
juice from 1/2 of a lemon
coconut water or apple juice

And so, you now have a glimpse into my daily vegetable routine. I use the three processes interchangeably, and sometimes together (while green juicing, I usually make a point to also juice some apples, which I use with both my vegetable powder drinks and Nutriblasts).

If anyone would like to share their experiences with green drinks and/or equipment, I’d love to hear them (successful or not)!